It might have launched back in early 2018, but the Canon EOS M50 remains one of the best beginner mirrorless cameras around. With its combination of an EVF, Dual Pixel autofocus, a small form factor and an affordable price tag, it’s a fun little camera for both smartphone upgraders and travel shooters.

The original EOS M50 isn’t without its weaknesses, though, which is why rumours have started swirling about an EOS M50 Mark II.

The latest speculation suggests it could bridge the gap to the more recent Canon EOS M6 Mark II while retaining features that set it apart from other EOS M cameras like an electronic viewfinder and vari-angle screen.

Other Canon EOS M50 Mark II rumours also suggest that it might fix the video restrictions of the current model and even come with in-body image stabilization (IBIS), which would be a big bonus for such a small APS-C digital camera. 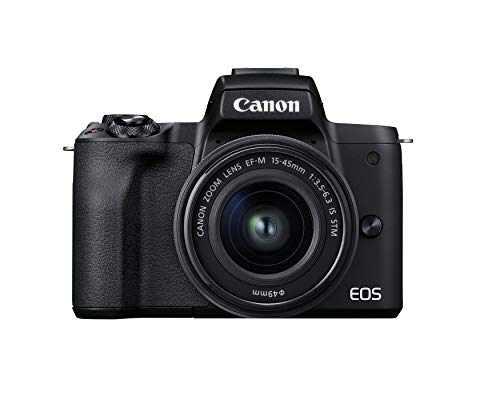 The initial Canon EOS M50 came out in February 2018, so it’s now well over two years old. Despite its relative age, the latest whispers from Canon Rumors suggest an EOS M50 Mark II until the end of 2020.

Earlier rumours had suggested that the EOS M50 Mark II would be launched in September, but it seems like that has been pushed back to a little later in the year.

Still, that fits the release schedule of other EOS M cameras like the EOS M6, which was succeeded around two-and-a-half years after its release by the EOS M6 Mark II.

Given that the Mark II isn’t likely to be available until later in 2020, the original EOS M50 remains a good buy at its current discounted price, as long as you’re prepared to accept its 4K video limitations.

Some early whispers in late 2019 from Canon Rumors gave us some possible basic specs for the EOS M50 Mark II.

These include a new 32.5MP APS-C CMOS sensor, which feels likely given its inclusion in the newer EOS M6 Mark II. That sensor gives you a big resolution boost over the 24.1MP EOS M50, which means greater potential for cropping your shots.

The rumours also suggested that the M50 Mark II will have a Digic 8 processor, which is the same one as the current model. We think it’s possible that it will actually have a version of Canon’s new Digic X processor instead because Canon has said that fresh cameras will contain tailored versions of this chip. Those Digic 8 rumours furthermore pre-dated Canon’s announcement of the Digic X processor chip for the Canon 1DX Mark III.

That said, the flagship EOS M6 Mark II has the Digic 8 processor chip and can shoot at 14fps with continuous autofocus, slightly more than the M50’s 10fps maximum, so a new design could certainly squeeze more performance out of the older processor.

Perhaps the most interesting rumours revolve around the M50 Mark II’s video shooting capabilities. This is currently one of the EOS M50’s main weaknesses, given it can only shoot 4K with a 1.6x crop and at 24p or 25p. It seems like the EOS M50 II, though, will be boosted to much more respectable uncropped 4K / 30p mode, will Full HD shooting at a slo-mo 120p.

This would be considered a particularly big deal for the M50 Mark II because its vari-angle screen makes it well-suited to vlogging. A major downside of the existing model’s cropped 4K video is that it makes it difficult to film at arm’s length or in tight spaces. But getting close to matching the EOS M6 Mark II’s video quality would make it a much better all-rounder for those who have a mixed shooting diet of both stills and video.

The most interesting rumour about the EOS M50 Mark II, though, is from Canon Rumors and suggests that the camera could have in-body image stabilization (IBIS). This would be considered a huge offer for a Canon EOS M series digital camera, and would again strengthen the EOS M50 Mark II’s vlogging credentials.

Other rumours suggest that the vari-angle screen will remain a 3-inch, 1.04-million dot affair, though there have been no leaks yet about upgrades to the electronic viewfinder (EVF), autofocus or battery life, that was another limitation on the EOS M50. The EOS M50 Mark II will hopefully go beyond 235 shots per charge, or at least give us in-camera USB-C charging.

There haven’t yet been any leaks showing the possible design of the EOS M50 Mark II yet, though a recent patent suggests Canon may have found a way to make its mirrorless full-frame and APS-C cameras a little smaller.

As Canon News pointed out, the patent shows a design that moves the shutter motor from its traditional position next to the battery compartment to beneath the shutter assembly. This could allow Canon to make the EOS M50 Mark II just a little smaller, though it won’t be a drastic change given the current M50 is already lighter than the EOS M6 Mark II and needs room for that viewfinder. Canon cameras are renowned for their considered handling and it’s unlikely to help make the EOS M50 Mark II too small at the expense of its ability to balance out longer lenses just like the EF-M 18-150mm f/3.5-6.3 IS STM.

It’s still pretty early days for EOS M50 Mark II rumours, but we certainly like what we’re hearing so far.

The Canon EOS R5 and EOS R6 seem to have been a watershed moment for Canon, with the camera giant finally releasing the handbrake on its mirrorless cameras and making them as uncompromised as possible.

We hope this same spirit is applied to the EOS M series, and that would certainly be the case with the EOS M50 Mark II if it does indeed contain IBIS, uncropped 4K/30p video, a 32.5MP APS-C sensor and a tailored version of Canon’s Digic X processor.

A small mirrorless camera with those features, plus Dual Pixel AF in all modes and an EVF, would be a potentially great option for vloggers or those looking to upgrade from their smartphone. We’ll bring you official info on this rumoured camera as soon as we get it.

Best Macro Lenses for Sony A6000

Best Lenses For Sony A77 II